My new friend SR (who’s actually a phlebotomist at one of the medical offices I frequent) and I met up today. Our last outing was for coffee at the excellent SoulFood Coffee House in Redmond, so we decided to aim for lunch this time. As we are both gaming geeks – though of vastly different generations (SR was born a month after I graduated from high school; also: I am old) – we decided to check out the recently-opened Bellevue location of MOX Boarding House, a game store / pub / restaurant. (No. Really.)

Some of you who actually knew me in my early college years might recall that I was a huge gaming geek. (Gaming of the pencil / paper / dice / figurine variety, for the purposes of this conversation. There was also computer gaming, but that’s not pertinent here.) Though I was primarily into AD&D and various types of Warhammer, there were few gaming systems I wasn’t willing to try. I have also long adored more traditional games (board and card and the like).

This information is important because you should know just how bloody disastrous it would have been for a store such as MOX to have been available to me when I was heavily into gaming. I already spent too many of my pennies on gaming-related items, and that was when I had to hunt high and low to find them. If I’d had access to a MOX Boarding House, I can’t even imagine the collections I would have amassed.

Though highly RPG card-game-centric (with strong focus on MtG), MOX has a fantastic array of board and card games in a wide variety of genres. Floor-to-ceiling shelves packed with games. SO MANY GAMES. And they offer places for you to play these games, whether in private rooms, or in the pub / restaurant. Because, not only are they a game store, they provide fairly tasty food and drink. They even have a selection of games available for you to borrow and play at your table. (SR and I were recommended ‘Mr. Jack‘ by the MOX staff. This turned out to be beyond our ADD- and coffee-enhanced brains, so we ended up crafting instead.)

If you’re at all a physical-world gaming geek, MOX is probably worth stopping by — assuming you can find parking. I lucked out and got a spot right in front of the store, but (from what I could see) they only appear to have about 25-30 spots, and the sign on the door says they have a max occupancy of 157. The math doesn’t work in their favor. 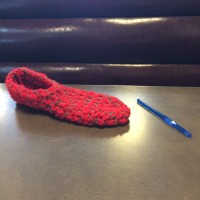 For example: SR knit a pair of size 11 slipper socks during our outing today. A pair! If I were knitting these, in my preferred yarn weight and using the appropriate needles, I’d guess they’d represent 4-5 days of average knitting. She crocheted them in about 2 hours. (The picture was taken shortly after she finished the first slipper sock.) By way of contrast, I cast on 96 stitches, and knit 10 rounds of 2×2 ribbing (the start of a hat for Jenn) in the same amount of time, resulting in about .75″ of fabric. Clearly, I need to start working with thicker yarn and larger needles.

And now I am back at home, having brought G some leftover 7 cheese mac & cheese (which is not nearly as cheesy as you would think, given the name, but still tasty). I have overcaffeinated, but am still sleepy. I think my body’s push for me to catch up on sleep continues. Also, thanks to a huge lunch rush and an overworked waiter, I was unable to get to the post office in time to mail the completed Flore, and post offices aren’t open tomorrow. (Though, the nearest post office does have a self-serve kiosk, so I might give that a shot.)

I hope you are all having (or have had) a wonderful Saturday, and a great start to 2015!