askmeri, get off my lawn, kids these days, knitting, research, tldr

There is something you must understand about Ravelry. It’s like Wikipedia for people who play with yarn. You go there looking for one specific thing, and five hours later, you’re looking at something that couldn’t possibly be more different than your original goal, and you have absolutely no idea how you got there. This blog post shall detail just a short trip a friend and I took through the Ravelry wormhole today. The whole conversation took place in less than two hours, with much of that time spent with one or the other of us not at the keyboard, or discussing terminal emulation issues, or bemoaning Kids These Days™, or the best way to feed pills to finicky cats. So, really, no time at all.

(TL; DR: Yarn, kids these days, pandas, and you really can’t ever take anything off the Internet.)

It all started out with a reasonably innocuous series of statements.

<@sauergeek> meri: http://www.ravelry.com/patterns/library/baalaclava
<@sauergeek> Just in case you know someone who needs it.
<@sauergeek> (Such as a sheep farmer in Alaska…)
<@meri> sauergeek: OMG. That’s… brilliant. And evil. And insanely creepy. 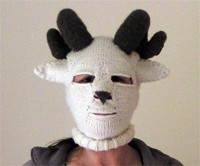 (If you’re not one for clicking of links and all, I have included the project’s image here, in all its glory.)

Because it is, no? (Creepy, that is.) I mean, there’s something…

Do you remember the 1987 remake of Dragnet, starring Dan Aykroyd and Tom Hanks? If so, go a step further, and remember Christopher Plummer’s goat man thing? That’s so what this reminds me of.

Although, sauergeek has a point of his own on that front:

<@sauergeek> My thought on seeing it was “how long before someone uses that in a movie or TV show for the masks bank robbers wear?”.
<@sauergeek> But it would also work well for Hannibal Lecter’s sidekick.

(That last, of course, has led to me wondering if Mads Mikkelsen would like any hand-knit items. But that’s neither here nor there. But, uh, if you happen to know the answer to that, and feel like sharing…)

Another great thing about Ravelry (and one of the most common ways to lose hours at a time to the site) is it provides you with easy insight into what other people have done with the pattern you’re looking at. This functionality led to:

<@sauergeek> One of the sets of project pictures shows someone turning it into a demon mask.
<@sauergeek> Red instead of white, circle/pentagram on forehead…
<@meri> Oh, dude. That’s awesome! Even without the pentagram / teeth, I love the colors and the outlines of the features.

(Again, I provide you with the image.) 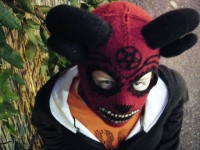 As you can see, though still recognizable as a spin-off of the original pattern, this is a pretty extreme reworking. It’s certainly more than just changing the colors of the yarn and adding some colorwork details. Reading the project notes for this rendition of the pattern is, unfortunately, somewhat frustrating.

<@meri> Awww, she does not provide enough detail as to her mods to make it so one could just pick it up and do it. Time to reverse engineer.
<@sauergeek> One of her mods seems to have resulted in that cross-shaped join at the top, which isn’t in the original.
<@meri> Yeah. She knit it in the round, which makes more sense to me, as well.
<@sauergeek> I suspect the original pattern is done the way it is specifically to avoid that join at the top.
<@meri> I kinda like the join.
<@sauergeek> But dunno, I’m guessing, and know approximately >< about knitting.

So, off to look at the new pattern. I mean, what harm could it do? 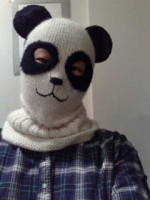 <@meri> Oh.
<@meri> Oh dear.
<@meri> This is SO sauergeek’s fault.
<@meri> http://www.ravelry.com/patterns/library/jackyll–hide
<@meri> The second picture.
<@meri> MUST MAKE
< Mist|> haha
<@sauergeek> I will happily take responsibility for this.
<@sauergeek> (Though to be fair, give mikka some of the credit — she’s the one who pointed me at the baalaclava.)

A panda balaclava. (See the picture, natch.) I obviously need to make this, right? I visit the Jackyll & Hide & Panda page. I discover a few things. First, Tomoko (the crafter) is (or at least uses as her primary language) Japanese. Second, she has made a whole hell of a lot of impressive projects. And third…

<@meri> (Well, crap. The knitter who did the panda version did, in fact, put up the new version of the pattern. On a domain that’s now for sale. And any other notes available are in Japanese.)

Things are looking grim for our heroine (that’d be me, in case this wasn’t clear). I don’t think I’d be able to reverse-engineer the pattern (though, it’s not completely beyond the realm of possibility). And tracking down a Japanese girl named ‘Tomoko’ who happens to knit? Reverse engineering was a better bet. (Though, while writing this post it did occur to me that her Ravelry user profile lists a URL for her. Huh.)

I was growing frustrated. This is obviously a project I must make, and I was going to be foiled by the Internet?

Then the context of the (continuing) IRC conversation came back to me. A few of us had a total ‘kids these days’ spree, with regard to the youth and all the things they don’t know about the Internet. During the course of this conversation, I needed to provide one of the participants with a link to JD’s NOC Reports (if you don’t understand, don’t worry; that’s not really the point).

I was able to provide the aforementioned link to JD’s NOC Reports thanks to the Internet Wayback Machine.

(If you don’t know what the IWM is, it’s basically … an archive of the web. They don’t grab every version of every page, but there’s a decent chance that, if you’ve ever put something on the net — particularly in The Olden Days™ — IWM might have a copy of it.) 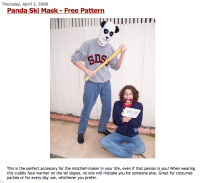 With a glimmer of hope, armed with the URL I wanted resurrected, I opened the IWM, pasted, clicked, and hoped. And the Internet gods were with me. The IWM had at least one version of the Jackyll & Hyde & Panda pattern filed away. And now, so do I.

Anyone need a balaclava?