Even recent readers will likely remember the Flore hat that I made in December of last year. As luck would have it, there was enough leftover yarn from making that one to… make another one! This way, the original recipient can be utterly mortified at her mother wearing a matching flower petal hat. Sounds fair, no?

At the new recipient’s request, I’ve been attempting to make the hat longer, so that it fully covers her ears, even when the base layer petals inevitably curl. I added 6 rounds to the base layer, and have added 4 rounds to each additional layer, for a total of 18 additional rounds. This should be close to two additional inches of fabric. But conversations with the new recipient have me doubting myself (and my math) (and my geometry), and now I’m not sure if it’s going to work out the way I think it should. I can’t figure out why it wouldn’t work out to my design, but I don’t know that the universe would totally disregard the notion of fiddling with basic math just to screw with one of my plans.

Part of the current problem is, of course, that I do not have the original hat here. It was sent up to its new owner quite a while back. This lack of physical ability to do side-by-side comparison makes it hard for me to gauge where things stand.

Then I remembered that I took pictures whenever I completed a stage. To the archives! 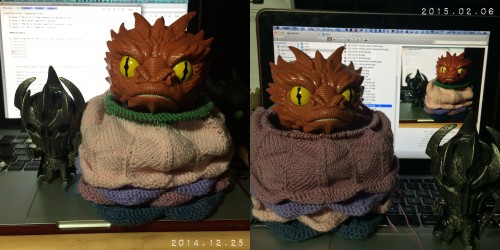 But, the petals on the first hat look more squooshed, so maybe that’s taking away from loft. And, since the hat is built in layers, it’s not like all 18 of the aforementioned rounds are going to be represented. And maybe Smaug shrunk!

(If you could see me now, you would see that I am wearing what my friends and I call my “scrunchy face,” used to indicate displeasure. Yes, I know I have the ability to share this phenomena photographically. No, I am not going to do so.)

I think the approach I’m going to take is thus:

Depending on how step 5 goes, the road from that point is fairly straightforward, though the amounts of crying involved are variable.