I am coining a new term.

I hereby propose that the acronym YAMA (standing for ‘Yet Another Medical Appointment’) be added to the common vernacular. This works especially well, as 山 (yama) in Japanese means ‘mountain’, and those dealing with chronic (or serial) medical conditions know that the continuous treks to various medical offices feels like climbing a mountain sometimes.

The reason this springs to mind this morning is that, thanks to the suggestions of those of you who responded to my query “WTF should meri do about her knee?“, I made an appointment with my PCP. My insurance does not actually require referrals, but 1) I like my PCP quite a lot, 2) I could get an appointment reasonably quickly (Thursday), and 3) she’s well aware of how broken I am, and might just suggest some scans or whatnot to have in hand at an initial appointment with an orthopedist or whatnot.

So yeah. Thursday. Gonna be a long day, as I have YAMA (!) that morning, and am planning to hang out with Jenn afterwards, but hopefully, it will be a useful day. (Not the hanging out with Jenn part. That doesn’t have to be useful. Just fun. And that’s pretty much guaranteed.)

Second verse, same as the first.

I am growing increasingly weary of waking up not because my body and mind have been sufficiently refreshed by the act of sleeping, but rather because my pain medications have worn off.

I really need to figure out what is wrong with my knee. It does not hurt until I try to move it, at which point it informs me that I should go back to not moving it. Attempting to do things like lever myself from a sitting to standing position causes me to produce sounds not unlike those of a puppy being beaten, assuming, of course, that the puppy knows how to swear fluently in English. The pain is almost exclusively down the front of my knee, which is (I believe) mostly tendon-y, as opposed to muscle-y.

END_OF_DOCUMENT_TOKEN_TO_BE_REPLACED

Pardon our dust while we renovate.

These days, most of the time, I think that I’ve come to terms with the changes that I (and those in my life who deal with me on a regular basis) have had to deal with over the last couple of years. I’ve had to completely redefine myself a couple of times in that span, and it’s been hard. Hard on me, and G, and my friends, and my (former) co-workers, and the ragtag bunch of people who are my not-through-biology family. But, I reach points where I think I’ve come to accept things as they are, and start to think of ways I can move forward.

And then a run of weeks like the past couple come rushing through, and I’m kicked in the ass and reminded once again how much has changed, and how much I’ve lost, and how much I have to adjust my thinking. And I discover that I’m not quite as reconciled to my reality as I like to think I am. And it makes me recede more into hiding, which is kind of an impressive feat at this point.

So, if I owe you emails or phone calls or visits or beer or whatnot, I haven’t forgotten about you. It’s more that I’ve misplaced me, and I’m digging through the mess trying to find me. I apologize for any inconvenience or discomfort this might cause you. I’m working hard to cobble together a new version of myself as quickly as possible.

Disappointing start to the day.

I had a rather rough night last night, between pain, insomnia, and restless leg. Normally, I’m resigned to such things, but today, I’m annoyed. See, I was supposed to get up early so I could head south and meet up with friends in from Massachusetts at Udvar-Hazy for a morning of oohing and aahing at wondering aviation history. Instead, I woke up late, and am having difficulty walking.

That’ll teach me, to make plans and stuff. *sigh*

Ah, yes. I remember this.

I have spent the bulk of today working on a layout project, where I’m fiddling with making things line up to the thousandth (yes, thousandth) of an inch, and going cross-eyed, and deciding if a leading of 28.2 or 28.3 works better in this situation, and exporting to PDF to make sure that things look the way I think things look, and generally not coming up for air for several hours.

And I’ve been loving every minute of it.

This meri is medicated. Loopiness may ensue. That is all. 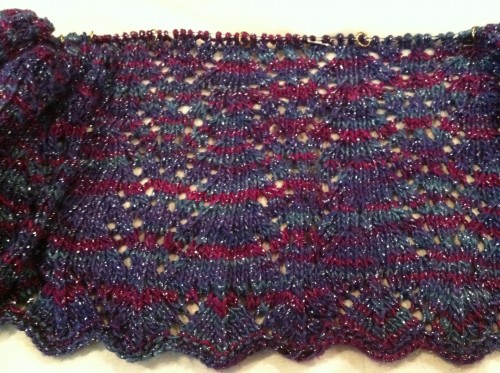 Another day, another greeting

Good morning, earthlings and other friends. I have a good reason for being in a good mood this morning! I woke up with ow, but much much less ow than I have had in the past few days. Heck, I was able to get out of bed without whimpering. I would dance a jig, but, well…

Here’s hoping that today bucks the trend of its Monday brethren and treats everyone gently.

On the plus side, finger wound aside: shoyu potatoes! Yum!